To serve as State Master Councilor is an honor.  One young man is elected by his peers to serve as the leader of all DeMolay in Maryland for one year.  His responsibilities are many and varied.  He must put together a term plan and budget for his year.  The term plan must include events and activities  that would be of interest to all members, and chapters within his State. The State Master Councilor must also motivate and inspire the members in the brotherhood of DeMolay.

He is the main representative of all Maryland DeMolays within the State, and is invited to attend and speak at many Chapter functions, and a number of masonic and collateral bodies in the State.  The position requires hard work and devotion to the order of DeMolay. 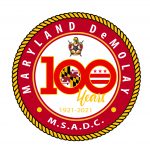